Mashup artist Pomdeter recently posted a set of screenshots to his Facebook page, describing how he uploaded a mix to the site hearthis.at with a 'DMCA-bait' title:

Pomdeter says the track contains non of those artists, but was, in fact, "10 minutes of noise and drums". The track may be found here. The screenshots continue to show how the track was automatically removed under the terms of the DMCA. Pomdeter draws the conclusion that the track was removed off its title alone, which flies in the face of the DMCA's fair use provisions

This provided a golden opportunity for experimentation. I was previously not a hearthis user, and I've recently modified a shell script to play 'music' that's completely randomly generated (hat-tip to Robert Elder).

So I generated some random music and uploaded it, under that same title.

The first step is to acquire a source of random noise. Personally, I find /dev/urandom to work well for this. 10 kilobytes is plenty:

Then using awk, we convert that random noise into a series of scale notes, and from there into a series of amplitudes representing those notes (all for a duration of about a quarter of a second). hexdump and xxd get us from and back to binary, which is then fed into sox to generate our actual audio file. For a more detailed explanation, I direct you back to Robert Elder.

The result: a 5 minute, 12 second .MP3 file of complete musical gibberish, which you may listen to here.

I created my hearthis.at account. Uploading itself went fine and was a smooth and pleasant experience from my new-user's perspective. Once transcoding was done, the track was then 'waiting for approval:' 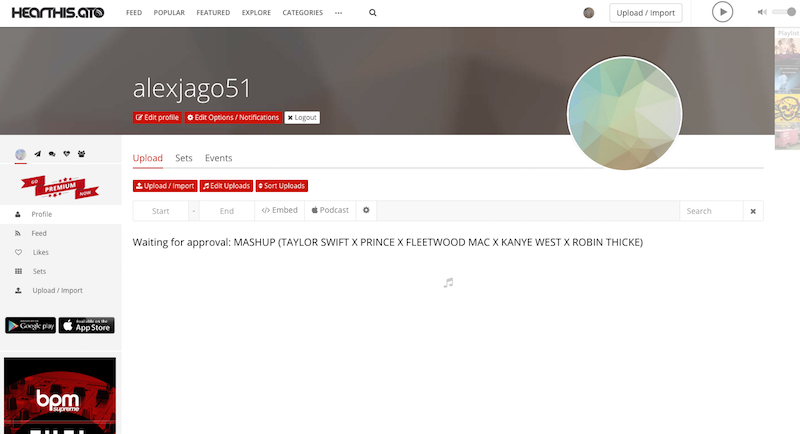 I have no idea how long this will take.

We don't know yet! This post is in real time!

I've just tweeted to @HearThisAt to hopefully get a better understanding of what this is and why it's happening. Maybe it's just some setting in my profile that I need to toggle, maybe it's copyright madness. Hopefully, we can find out.

24 hours later. @HearThisAt responded to my tweet, asking if I'd received an email from them (I've searched for such an email and can't find one).

random music by alexjago51 on hearthis.at

Well, this post went up in April 2016, and it's now late September. The first track never did get approved, so I suppose that's that.

HearThis are pretty obviously flagging tracks purely off their titles. It remains to be seen what happens to that first track, especially whether Universal puts in a spurious claim. If someone wanted to yell about trademarks, or false advertising, sure. But it's not a copyright breach.

It will be particularly amusing if said claim does go in - a US law applied against an Australian's upload to a German site.